Reaching the Summit of Mount Kilimanjaro

Reaching the Kilimanjaro summit, the crater rim and its glaciers: no matter which of the five common climbing routes you choose, there are only two paths to get to the crater rim. (Not counting the dangerous and seldom used Western Breach Route.)

Coming from Gilman's Point you pass Stella Point on your way to the summit of Kilimanjaro, Uhuru Peak.

(This is one of the pages in the photo gallery. For more information on climbing Kilimanjaro use the links above. To see more pictures go here.)

Pictures from the Crater Rim and Kilimanjaro Summit

As I wrote on other pages, there is never any need to rush on a Kilimanjaro climb. (And given what you now know about altitude sickness, it would never be a good idea anyway!)

While some people make it to the summit for the sunrise, the sunrise can be seen from any point along the crater rim or on the way up. The early morning light will bathe the remnants of Kili's glaciers in pastel colours. 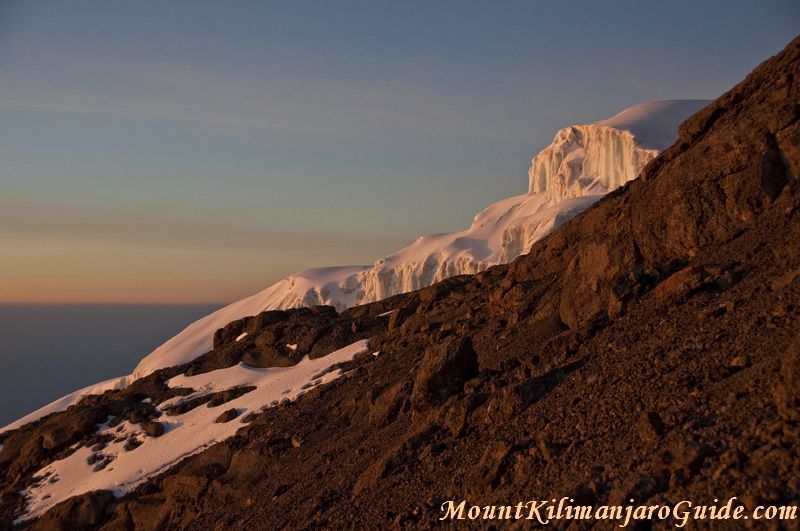 Once the sun is up the light becomes harder, but the shadows are still long. The photo below was taken from Stella Point and shows the view into the crater, most of which is still in the shadow of the rim.

On the right of the photo you can see footsteps in the snow. They lead back into the direction of Gilman's Point, about 30 -45 minutes away. On the left you see two climbers on their way towards the summit.

View into the crater from Stella Point. © Uta Philipp.

The walk along the crater rim is a gentle up and down. Even though the ups are barely visible to the eye, if you are affected by the altitude you will certainly feel them! Up here everything happens in slow motion.

The photo below was taken further along the walk on the crater rim. The scenery has changed. Again you can see the way we came from on the right, the path to Kilimanjaro's summit on the left. And you can see that the crater itself is mostly in full sunlight now.

On the way you will be passing what is left of Kilimanjaro's glaciers.

View of the glacier from the crater rim. © Uta Philipp.

Not that much, really... Still, it will take decades before the last ice here disappears.

About 45 minutes after leaving Stella Point, or one and a half hours from Gilman's Point, you will finally get a sight of Uhuru Peak. (You can just see the sign at the summit and the people around it on the left.) 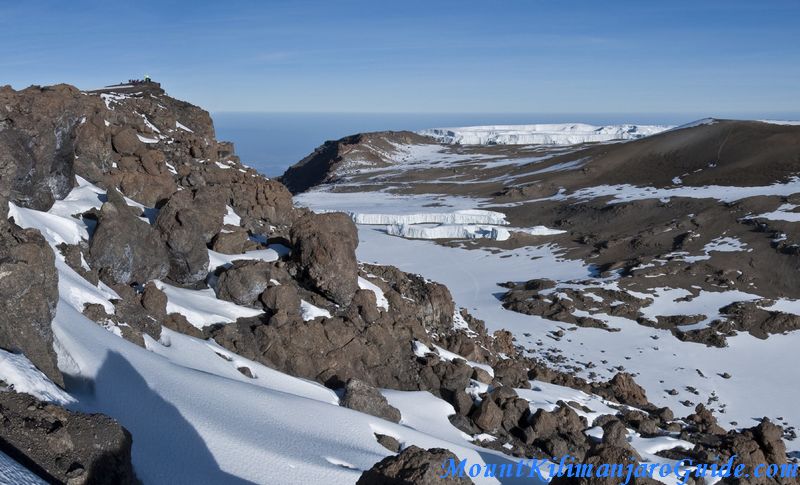 Frankly, the summit itself is not all that spectacular. It's just the highest bump in the bumpy crater rim, and chances are it's very crowded and you have to wait to get your turn for your Kilimanjaro summit photo. 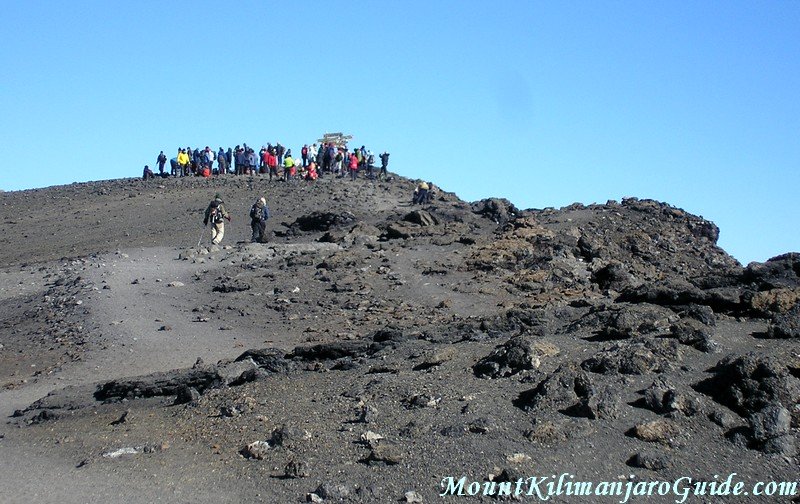 But hey, it's not as if at this stage anyone cares much about details like that, right?
Congratulations, you are standing on one of the Seven Summits, the highest point in Africa! 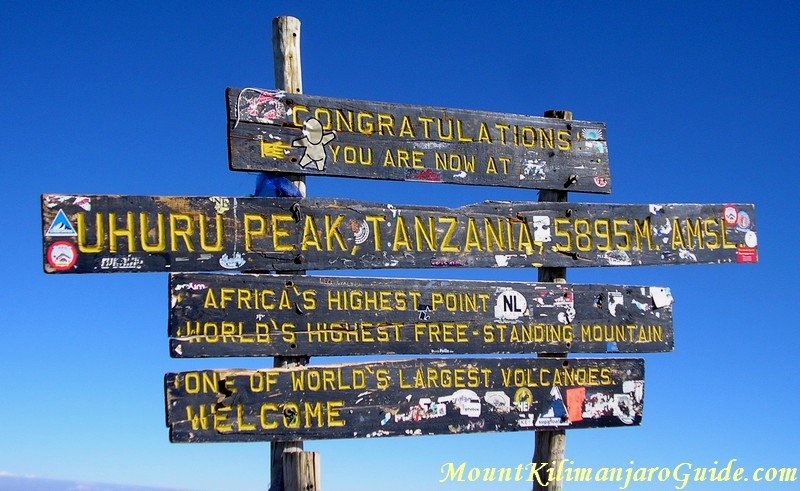 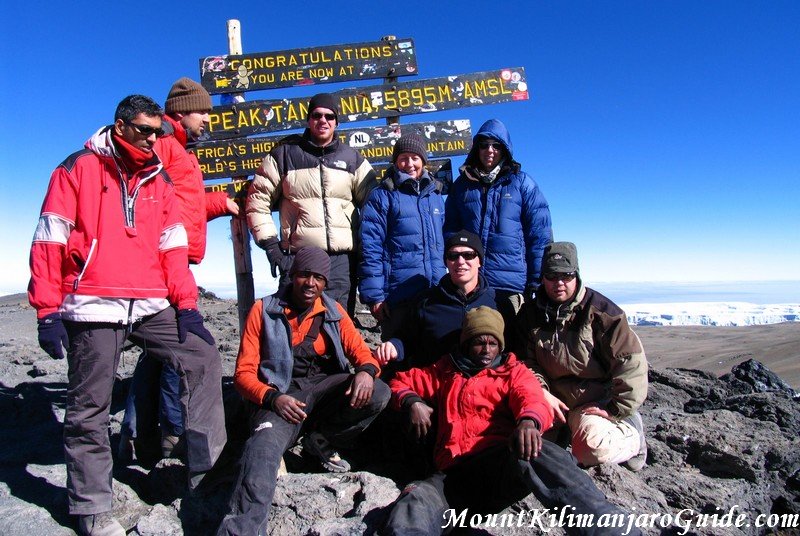 Reaching the summit of Kilimanjaro.

This is our group at the summit. Have a closer look, even the two guides don't look too sprightly. The only person genuinely smiling and not affected by the altitude is my 64 four year old, smoking, couch potato mother in the middle. (Her story is on the home page.)

Ok, it's dangerous to remain at that altitude for long and your guides will soon herd you back towards Stella or Gilman's Point from where you can hopefully scree run and slide quickly and easily towards a well deserved lunch break at camp, before packing up and getting yourself the hell out of there, further down to safer altitude for your last night on the mountain. 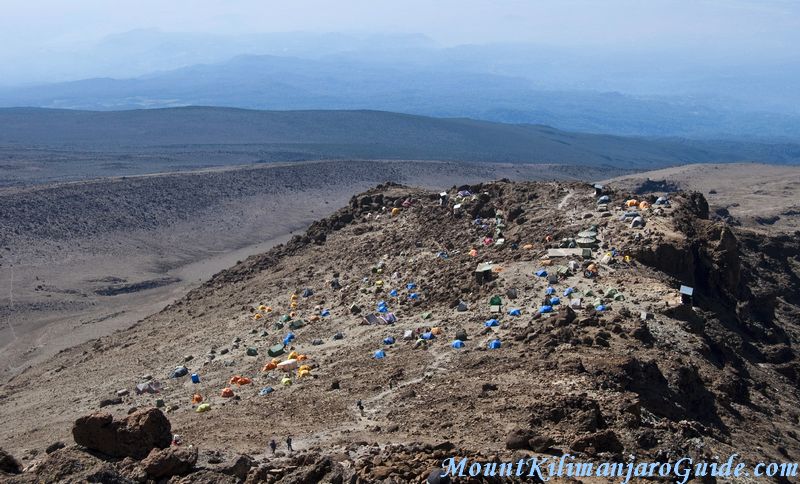 Next page in the gallery: Kilimanjaro Wildlife

What it takes to Climb Kilimanjaro

Return from Summit of Kilimanjaro to Home Page