What animals live on Kilimanjaro and where can you see them?

Kilimanjaro wildlife is elusive. Yes, wildlife does live on Mount Kilimanjaro, especially in the forests that cover the lower slopes. But spotting animals on Kilimanjaro is not as easy as you might think.

If you want one of those classic pictures with elephant or giraffe in front of Kibo peak, then you better book a safari in Amboseli National Park in Kenya, not a Kilimanjaro climb in Tanzania.

Mind you, Amboseli lies at the foot of Mount Kilimanjaro, towards the north. If you climb Kilimanjaro on the Rongai route you may get lucky, as on rare occasions some of the wildlife does venture up Kilimanjaro.

But if you want to climb a mountain and see lots of wildlife, go and climb Mt. Meru in Arusha National Park (not far from Kilimanjaro National Park).

On the slopes of Mt. Meru you are guaranteed to see giraffe, warthog and water buffalo, colobus monkeys, blue monkeys, bush buck and dik dik, many, many birds... With a bit of luck even elephants or hyaenas. You are accompanied by an armed ranger, because even though leopards are notoriously hard to see, on Mt. Meru there is the very real possibility to meet one!

And wildlife on Kilimanjaro? Well, eland and African hunting dogs are amongst the most exciting creatures that have been spotted - once or twice. A frozen leopard was found in 1926 and there have been two more sightings since. I guess it is not toally impossible that one day someone might see one again, but don't hold your breath.

Kilimanjaro is totally overrun with people, and as a rule animals like to hang out where people don't.

Let's be realistic and first look at some pictures of the Kilimanjaro wildlife that you CAN expect to see: 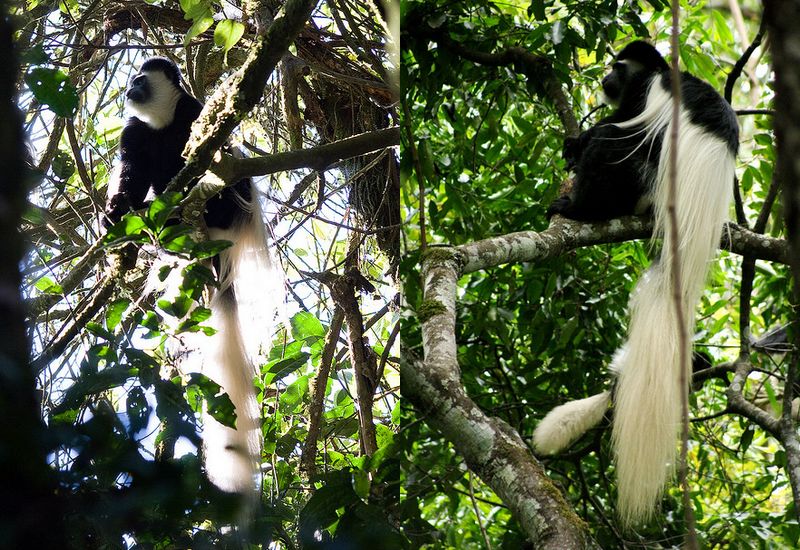 Just look at that tail... Black and white colobus monkeys are really good looking monkeys, spectacular even. They are comparatively shy companions, but you do have a very good chance of spotting them in the forest above the Mandara Huts (Marangu route) and at the start of the Lemosho/Shira and the Rongai route.

(Getting close enough to them to get a good photo, especially in the challenging light of the dense rainforest, that's a different issue. ) 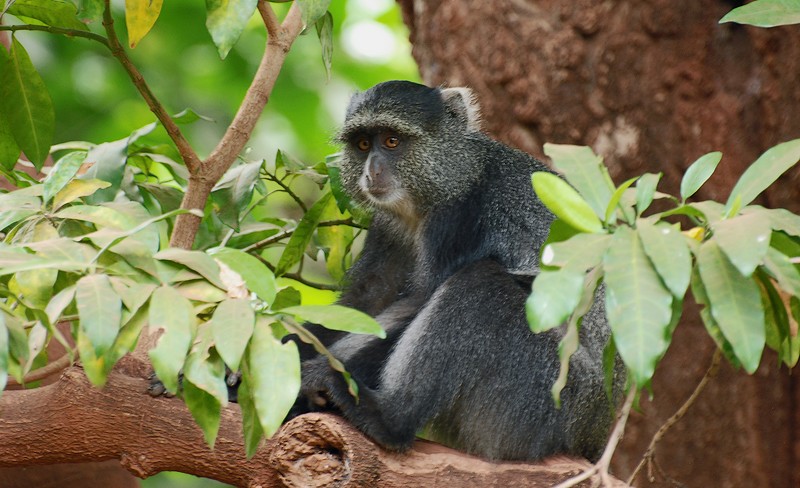 As you can see, blue monkeys are by no means blue... These fellows are fairly common and not worried about people at all. A big number of them hang out around the Mandara Huts on the Marangu route. That's why they call the patch of forest above the Mandara Huts the monkey forest.

Well, and that is probably the most impressive Kilimanjaro wildlife you will come across. Unless you get excited by the mice that live at the Horombo Huts... (They are four-striped grass mice and don't mind sharing their living space with humans.)

Beyond that there are small lizards (of which I currently don't have any photos) and then there are the birds... 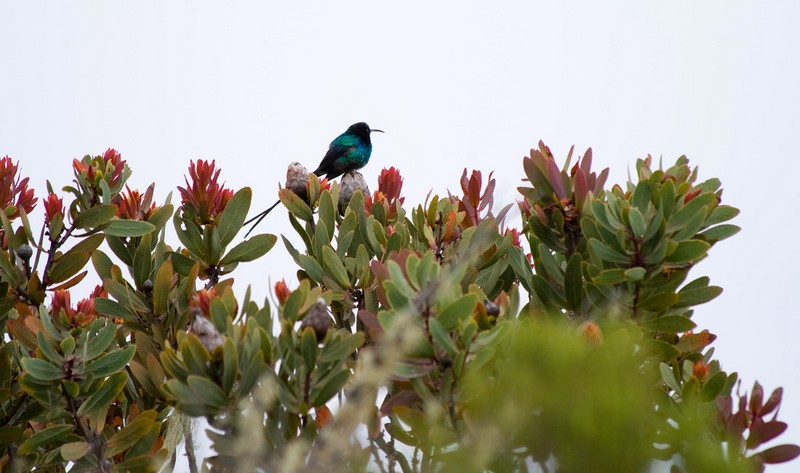 Malachite sunbird on a protea flower, animals of Kilimanjaro, photo by Stig Nygaard.

This is a male malachite sunbird. The plainer female is shown in the photo below.

Get a guide to point out their voice to you, and you will often hear them before you see them. Sunbirds are plentiful on Kilimanjaro, in all areas where lobelias and proteas grow, which is the heath and moorland.

A particular good place to see them is the Karanga Valley, which you will cross if you climb on the Lemosho, Shira or Machame Route. 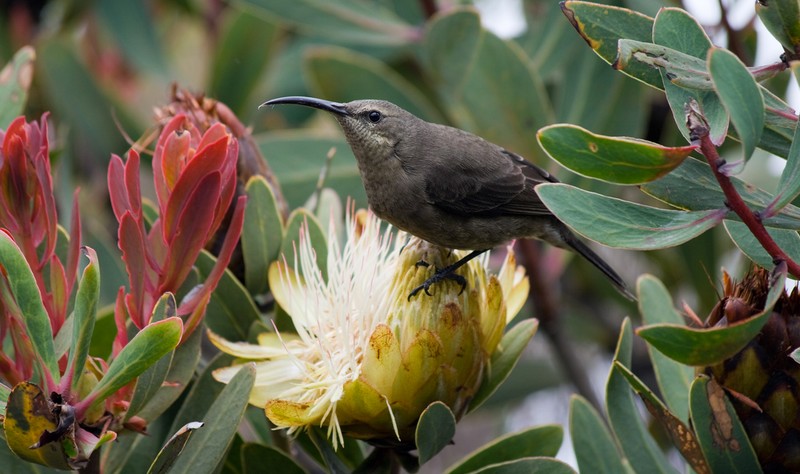 The photo below shows a variable sunbird. You may spot those on Mt. Meru or maybe on safari in Tanzania, but unfortunately not on Kilimanjaro. 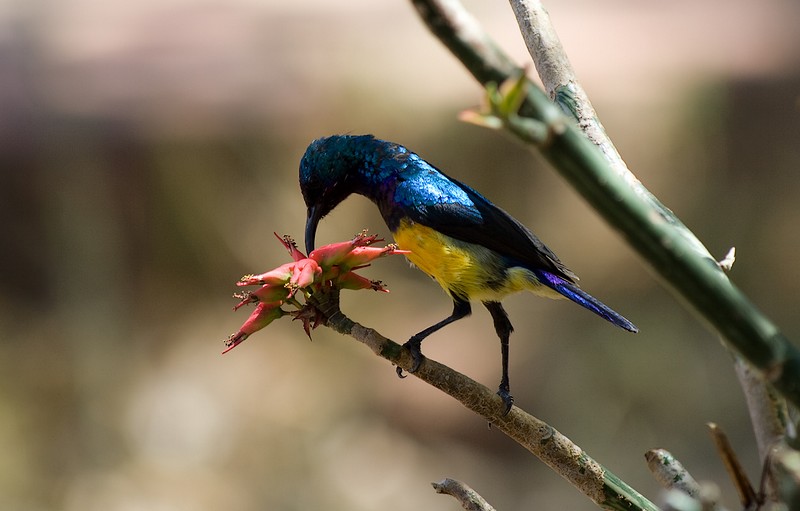 The silvery-cheeked hornbill is a rather large bird that lives in the forest, but also around houses and plantations. (It likes to eat fruit.) You may see them on Kilimanjaro, but you may also see them on the grounds of your hotel like we did. 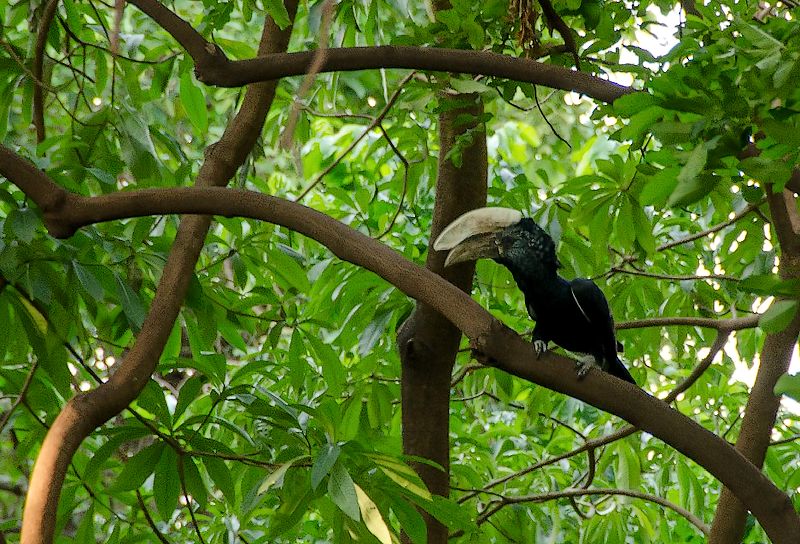 White-necked ravens are big birds with large, strong, scary looking beaks. They hang around the campsites and huts on Kilimanjaro (and Mt. Meru), scavenging and hoping for scraps. 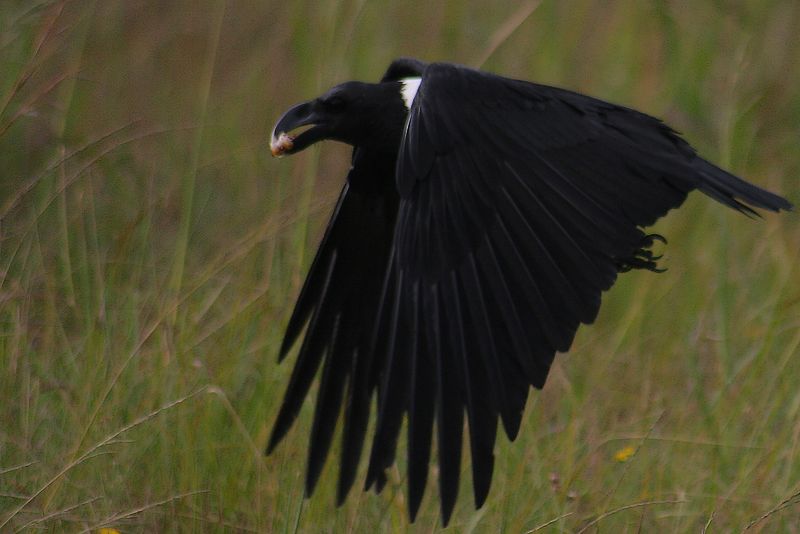 
What it takes to climb Kilimanjaro