To climb Mount Kilimanjaro on the Rongai route used to guarantee you a quiet trek away from the masses.
The Rongai route is marketed as a remote wilderness experience and for much of the year it still is.

But watch out: over the last years Rongai has seen a surge in popularity.

If you climb Kilimanjaro on the Rongai route during the main season (August to mid October) and if your climb starts on the usual group departure day, you may find yourself in the middle of a pretty big crowd.

(Most groups depart Sunday, so people can finish work Friday, arrive Saturday, start climbing on Sunday and be back in the office the Monday after.) 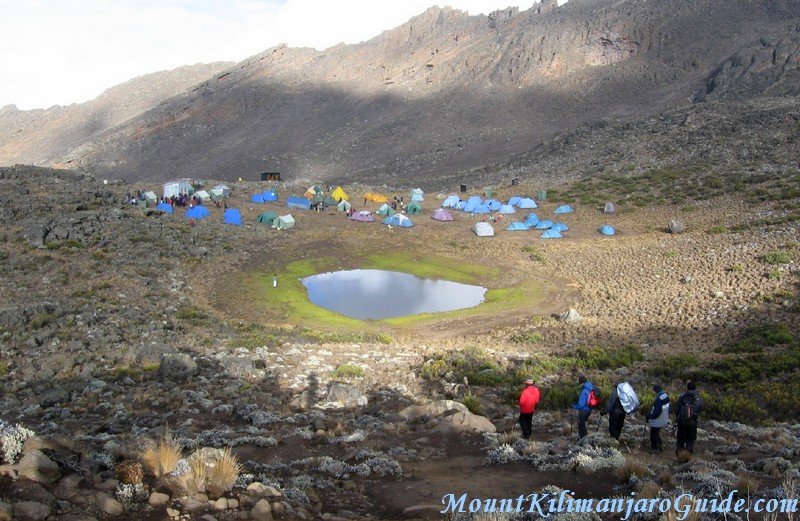 Six different groups are camped at the Mawenzi Tarn Camp.

Still, Rongai remains much quieter than the popular Machame orMarangu trails. It also has several other advantages that should make it one of your first choices:

A drawback is that to get to the other side of Kilimanjaro you have to drive for a couple of hours, and that costs extra. So Rongai is more expensive than a six day trail on Machame or Marangu.

The other drawback is that the Rongai route has a reputation as being less scenic than other routes.

However, that applies mostly to day one, when you will be trekking through fairly open country instead of the dense rainforest. But you'll see the rainforest on your descent! You are not missing out on anything.

As for the rest of the Kilimanjaro climb on the Rongai route, read the detailed description below. 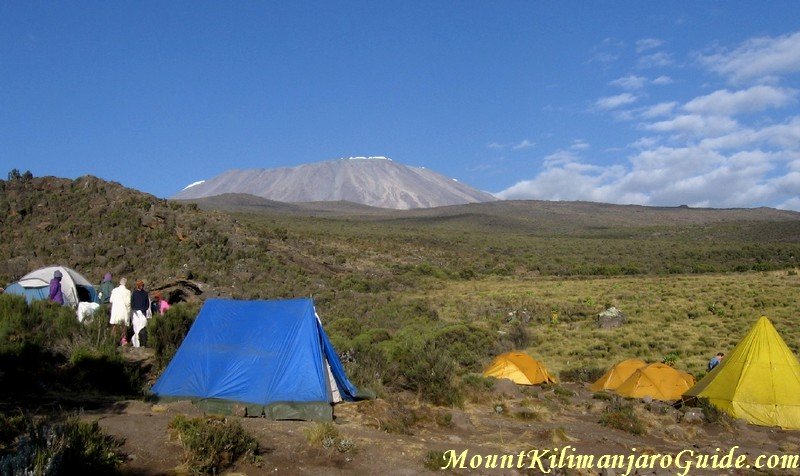 Waking up on Kilimanjaro, Rongai route: great views of Kibo and the eastern ice fields.

The Rongai route has several variations. It can be done as a five, six or even seven day trek.

The extra day is not spent in the same camp as the previous day.
(If you take an extra acclimatisation day on the Marangu Route you will simply hang around one camp for a second night.)

The six day Rongai trek usually follows a different trail than the five day version. After day two you make a detour towards Mawenzi Peak. Some operators of six day treks simply ascend slower, making an extra camp instead of the detour. All seven day treks make the detour to Mawenzi.

This itinerary (and the detailed route description below it) describes the six day trek with the detour via Mawenzi Tarn, one of the most scenic campsites on the montain. 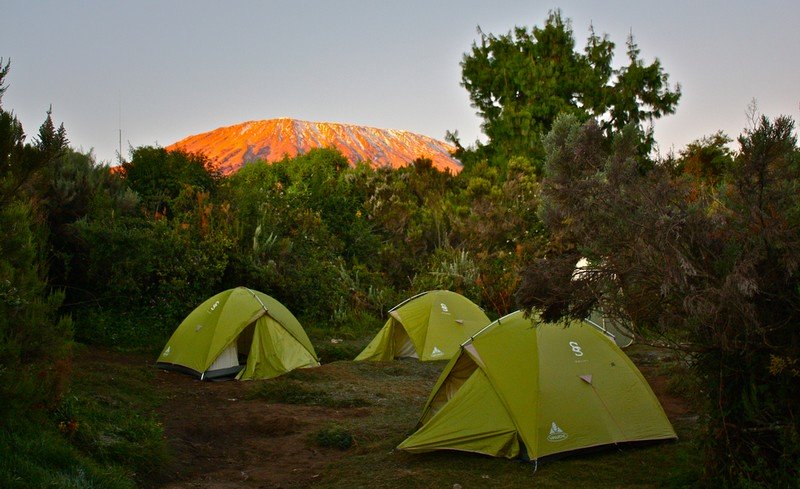 The first camp on the Rongai Route, photo by Kyle Taylor.

Your first day on Kilimanjaro starts with the transfer from your hotel to the village of Nalemoru. Yep, Nalemoru, not Rongai.

This route used to start from the border village of Rongai, hence the name Rongai route, which is still widely used. But the start of the route was eventually moved away from the Kenya border, to Nalemoru near Loitokitok. So now you may find any of these names used in descriptions and even on signs of the trail: Rongai route, Loitokitok route or (rarely) Nalemoru route. Rest assured, it's all the same trail.

The drive from Moshi or Marangu, around Kilimanjaro, to the Rongai route on the other side, takes two to three hours. It is a picturesque drive through the rural Chagga villages in the foothills.

However, due to the rough track it is at the same time a bumpy ride that leaves everything inside your vehicle the same colour, evenly covered with dust. (A major road upgrade appears to be under way, so we'll see what happens.)

Depending on your timing you may have your packed lunch at Nalemoru while you wait for all your gear to be distributed amongst the porters and for everyone to get ready.

The first day on the Rongai route leads intially through cypress plantations, then through fairly open country with only two patches of montane forest. Even those forests are nothing like the rainforest on the western and southern slopes. The scenery of the first day may not be that memorable, but the wildlife can be.

Birdlife is prolific and you should also see some colobus monkeys. What you may spot beyond that depends on the time of the year and the amount of people on the trail, but Rongai is certainly one of the routes that offers a greater chance of seeing wildlife on Kilimanjaro.

The patchy forest quickly gives way to the heather that dominates this day and the next.

You soon reach the First Cave Campsite where your porters should have already set up your tents and may even have hot drinks and popcorn waiting.

By the way, there aren't any big caves to look at. In fact, there is nothing significant about this campsite at all, except for the people.

If you climb during the busy season don't be surprised if you see this camp teeming with climbers and staff. Also, don't be too disheartened. Because the Rongai route has several variations, the groups will soon go different ways.

If you managed to pick a quiet day then this is actually a really nice camp, with lots of wildlife and a real sense of wilderness about it. 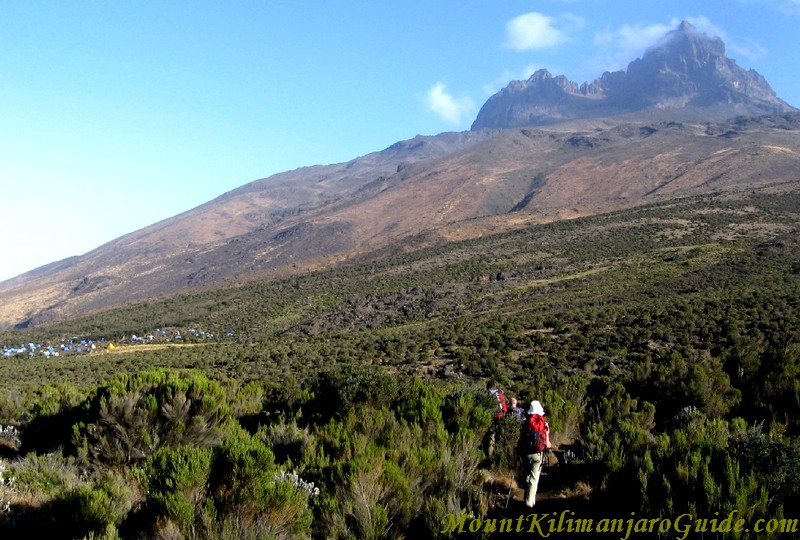 Approaching the second camp, Mawenzi Peak in the background.

Until lunch time all groups still follow the same path, through moorland covered in heather, on an increasingly steep trail, to the lunch spot known as the Second Cave Camp (3450 m/11320 ft).

Some people will have lunch here and continue, some may even make camp.

(Six day treks without the Mawenzi detour may spend a night here, the next night at Third Cave Camp, and then continue to Kibo Huts. I strongly recommend the Mawenzi Tarn detour instead.)

The much nicer six day route, the one that allows for excellent acclimatization, swings south east towards Mawenzi.

The path, not so steep any more, ambles through the heathland with the occasional rocky section and a few little ups and downs to keep things interesting. I find this a very enjoyable day, with great views towards Mawenzi, Kibo with its eastern icefields, and, weather permitting, back down the mountain over the Amboseli Plains into the distance.

It is, however, a long day. Especially those who start to feel the altitude will be glad to arrive at the next campsite, the Kikelewa Caves Camp, near a group of small caves in a valley below the saddle. 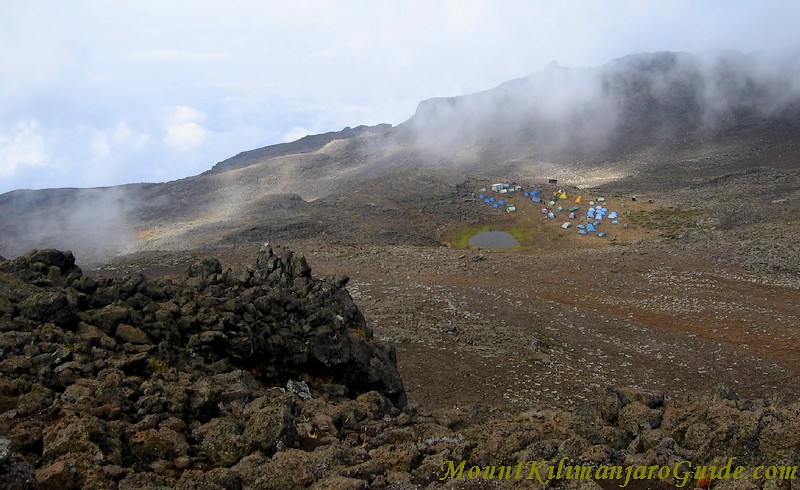 The Mawenzi Tarn Camp viewed from above. The photo was taken on the afternoon acclimatization walk.

Today you wake up to great views of Kibo in the early morning sun. Your day starts as yesterday finished, on an easy path up a gentle slope. But soon the scenery changes and the trail becomes steeper and steeper.

There used to be a huge number of the giant senecios lining this section of the way. Unfortunately a fire that swept up this slope destroyed most of them. Only a few of them are slowly coming back to life now.

But the last of the vegetation will disappear soon.

If the steepness of the path starts to bother you, know that you must be near your next campsite! Today is a short day and you will have lunch at camp.

The Mawenzi Tarn Campsite is one of the most spectacular campsites on the mountain, right underneath the jagged peak of Mawenzi, in a protected hollow, next to a tiny lake.

Several paths lead up the ridges and towers of Mawenzi, taking you to great views across the saddle towards Kibo. You will be doing some exploring on an acclimatization walk in the afternoon. After a hot lunch and some rest, that is. 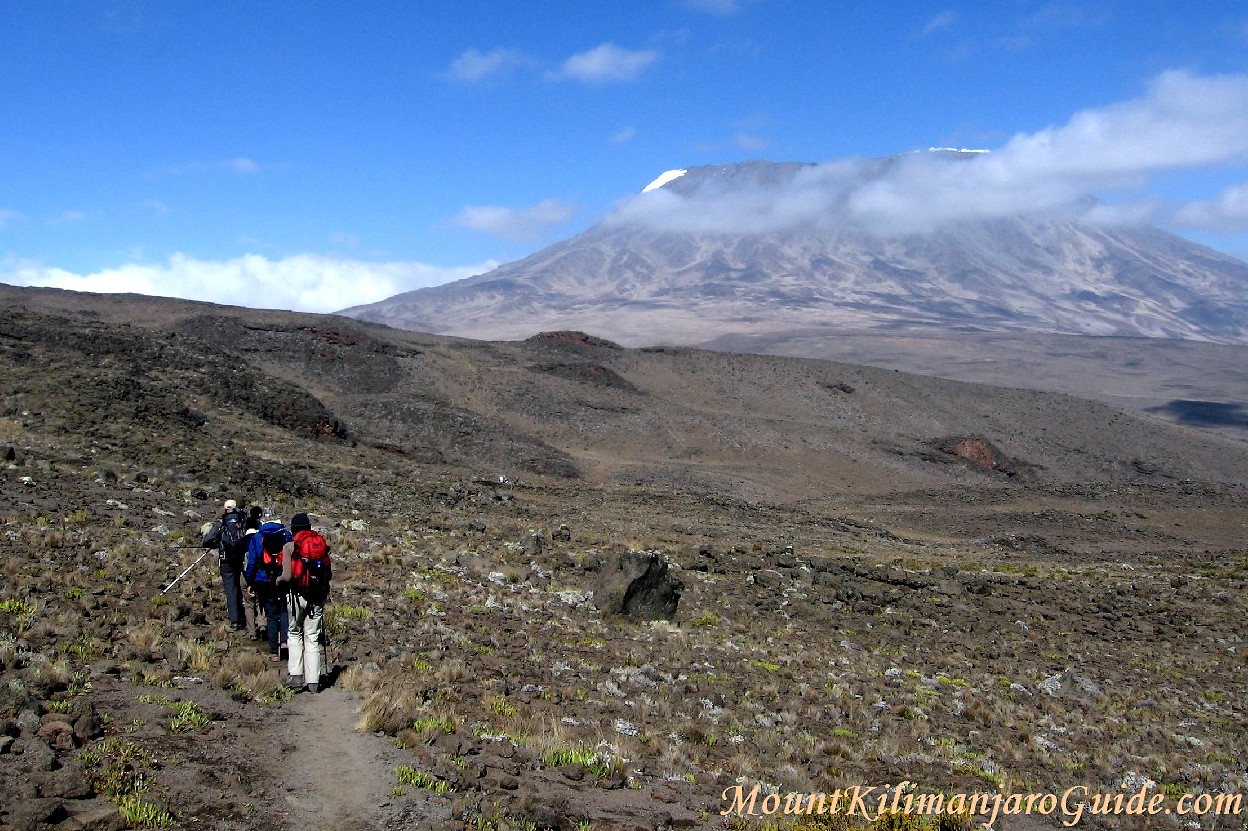 Day 4 on the Rongai Route, heading towards the ridge and "The Saddle" behind it.

Today the direction changes sharply as you start heading back towards Kibo, first climbing over a small ridge, and then wandering on a comfortable path along the northern side of "The Saddle".

If the view is clear it will be breathtaking, especially when you get your first peak over that ridge.

The saddle is the barren plain of alpine desert between the two main peaks of Kilimanjaro: Mawenzi and Kibo. The only living things left are some hardy grasses and the occasional everlasting flower. (How DO they do it? Blooming in this environment.)

The landscape can be quite dramatic, open and windswept, with big clouds rolling across it, big boulders to rest amongst... Many people really enjoy this part. But it all depends how well acclimatized you are.

After the acclimatization day yesterday most people feel fine and this is an easy stroll until you get to the end. The last part leading up towards the Kibo Huts is steeper, the air is thin, and you will feel the lack of oxygen.

You will be looking at Kibo the whole time, and you will be having a good view of the challenge that lies ahead for you tonight.

Just take it very easy. The best thing about this route is that it will be only around lunch time when you get to Kibo Huts. You'll have plenty of time to eat, rest and acclimatize some.

Just before you get to the Kibo Huts you will be joining the wide beaten path of the Marangu route, and you will realize just how remote the last days have been.

The Kibo Huts themselves are not exceptionally scenic, but you will likely be camping a little below them, with good views back over the saddle.

Have an early dinner and early night, and hopefully get some sleep. This is the big night... 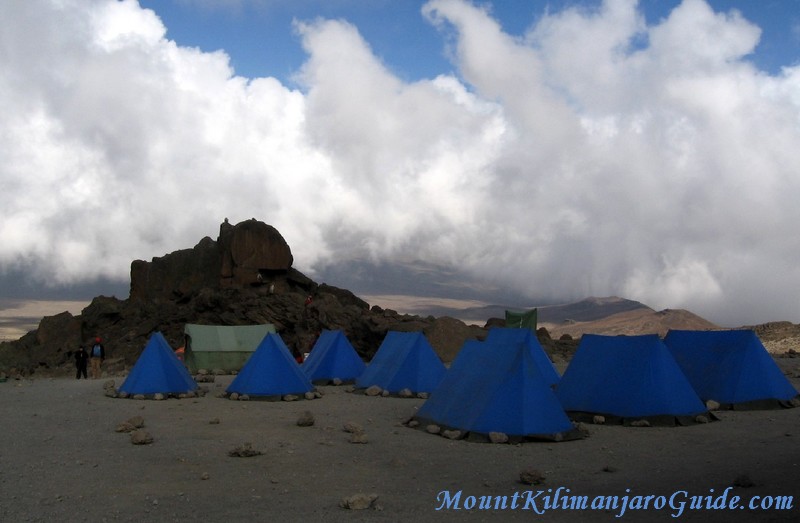 The highest camp on the Rongai Route, Kibo Huts Camp.

You are sharing the summit trail with the climbers from the Marangu route. Read on about summitting Kilimanjaro when climbing the Rongai/Marangu Route.

More about all Kilimanjaro Routes