Mt. Kilimanjaro Weather - When is the Best Time to Climb?

The Mount Kilimanjaro weather affects your climb and your success chances. When to climb Kilimanjaro is an important decision.

Bad weather on Kilimanjaro not only makes for a miserable trek and ruins your photos, most importantly it simply makes the climb twice as hard!

You are a LOT more likely to reach the summit if the weather on Kilimanjaro is good.

Mount Kilimanjaro is near the equator. In the tropics there is no such thing as summer and winter. There are only dry and rainy periods. Or "dry seasons" and "wet seasons".

Climbing Kilimanjaro during the wet season means you have to slog through very deep mud during the first days. At higher altitude you have fog and drizzle, and slowly but surely the moisture will creep into your clothes, your gear, your bones... 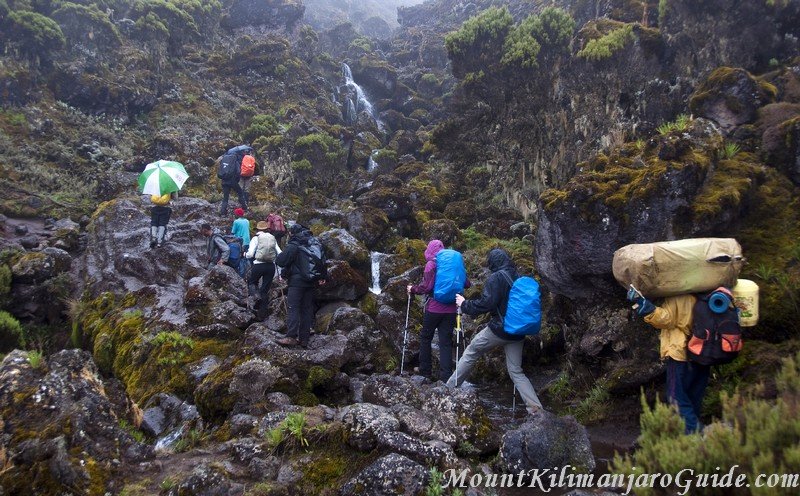 A second rainy day on the Machame Route. Not the best weather for Kilimanjaro. © Uta Philipp.

At the top you may have to fight your way through ice and snow. Having moisture in your clothes and everything is not going to help with the cold up there.

But there are other aspects to consider as well. The temperatures, the views, and of course the number of people on the mountain. As so often, there is no hard and fast answer and no single best time to climb Kilimanjaro.

So lets look at the Kilimanjaro weather details over the year.

The Weather on Kilimanjaro - When to Go?

The main rainy season lasts from the end of March through to mid June. As elsewhere in the world, when exactly it rains and when it stops is impossible to predict. It's the warmest time of the year in Tanzania, but those months are so wet that many operators simply do not offer climbs in April/May at all.

The rain gradually decreases, and so do the temperatures on Kilimanjaro. The weather on Kilimanjaro is fairly dry and clear but the nights will be bitter cold. June is quiet, but the number of climbers increases as the year progresses.

August and even more so September is the peak climbing season on Kilimanjaro. The weather is good with many clear days and warmer than in June/July. You may, however, get clouds blanketing the forest/moorland zone, and on the southern routes you may get rained on on the first days. But once you leave the rain forest behind all is good! The good conditions last into about mid Occtober when the build up for the short rains begins.

The weather on Kilimanjaro becomes more unstable and the number of climbers drops. As in all tropical regions of the world, the wetter time of the year announces itself with afternoon clouds and occasional thunderstorms. As long as you are equipped to withstand the occasional shower, this should not present any major problems.

November is the small rainy season, and the rain lasts into mid December. The temperatures have dropped and the rain brings with it all the hazards that I described at the top of the page. Not the best time to climb Kilimanjaro.

The four to six weeks around Christmas and New Year are the second peak climbing season on Kilimanjaro. Traffic is extremely high despite there still being a good chance of rainfall and thick clouds in the lower regions. It's not a time I would choose.

Mid January to mid March is also a good time to climb Kilimanjaro. The weather is reasonable, not too cold, not too wet, and there aren't as many climbers. The days are mainly dry, beautifully clear with few clouds and occasional brief showers. In March the chances of rain gradually increase as you approach the long rainy season. See above.

There are a few more things worth mentiong about the weather on Kilimanjaro.

You may decide to climb at a less than perfect time, be it because you want to avoid the main rush or because that is the only opportunity you have to take the time off from work. If that's the case, consider the Rongai Route. The northern side of the mountain is much drier than the otherKilimanjaro routes.

And if you want the best weather on Kilimanjaro but hate crowds, then the same applies. Choose your route wisely. There is less traffic on Rongai, Shira and Lemosho than on the overcrowded Machame and Marangu routes.

The other thing are the temperatures. Photos of people in short sleeves during the climb, or without hats and gloves on the summit, may leave a wrong impression.

The day and night temperatures can be vastly different. In that respect the alpine desert is no different to other deserts in the world. Above 4000 metres (13000 ft) a sunny day may be above 30°C (85F), the nights are still below zero.

One question that nearly everybody asks: just how cold is it on the summit? Or rather, during that night climb? The temperatures during summit night can drop to -20°C (-5F), but be aware that with the additional chill factor of wind the felt temperature may be as low as -40 (curiously, both in degrees Celsius and Fahrenheit).

Prepare for the worst case scenario, and then enjoy that everything turns out much easier than expected!

Read more about What it takes to climb Kilimanjaro