A Kilimanjaro ascent via the Western Breach route is the most challenging and also by far the most dangerous way to scale Kibo and reach Uhuru Peak.

The danger lies not in the climb itself, it lies in the melting glaciers above the route. As the glaciers retreat they release previously bound up rocks.

In January 2006 rock fall killed three American climbers on the Western Breach Route. (More about the accident below.)

The route was closed while the circumstances were investigated. The investigation revealed that the route is not safe. More rock slides are expected to happen. To minimize risk to climbers the route was changed to minimize the time spent in the highest risk area. 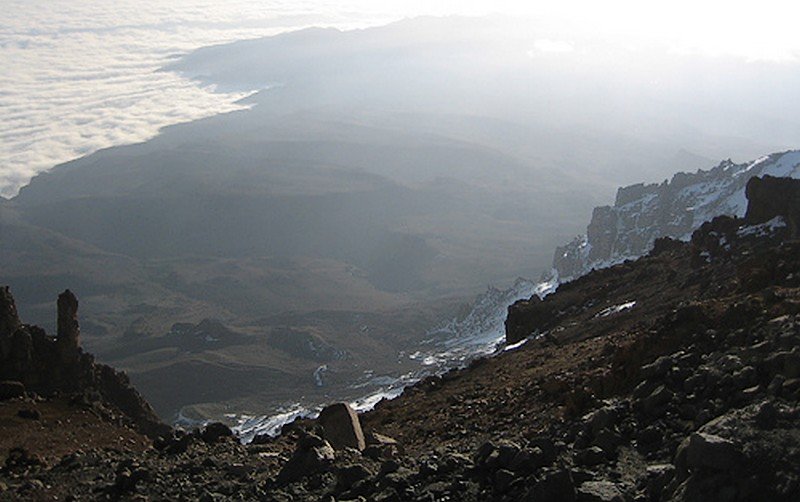 Kilimanjaro, Western Breach Route viewed from above, photo by Telethon via Flickr.

What is so tempting about the Western Breach Route?

One aspect is the challenge itself, the chance to do something unusual and to be different.

Another aspect is that, as the name says, the route leads through a breach in the crater wall. Where all other routes take you to the crater rim, climbing Kilimanjaro on the Western Breach Route takes you inside the crater.

It gives you an opportunity to enter and camp in the crater. Climbers can explore the Furtwangler Glacier, the Ernst Reusch Crater, the Ash Pit, even take excursions to the Northern and Eastern Ice Fields.

Standing in front of the Furtwangler Glacier near the Crater Camp, photo by La Chiquita.

However, there is no need to take the big risk that is attached to a Kilimanjaro climb via the Western Breach Route. You can access the crater and the breach from above.

Even if a descent into the crater is not a standard offering on the otherKilimanjaro routes, it can be added to any of them. Some agencies offer a night in the crater camp as an additional option. If you book a private climb it should not be a problem.

Theoretically you could also add a crater visit to a standard climb schedule by climbing down into the crater on your summit day and back up. It would take an extra two hours to get down, have a good look around and get back.

Sounds good in theory. In reality you won't have the energy, and by the time you reach the peak you won't care. If you are serious about seeing the crater, do spend a night there.

Also make sure you allow LOTS of time for acclimatisation on the way there, otherwise your body won't allow you to spend a night at that height (5729 m/18796 ft). 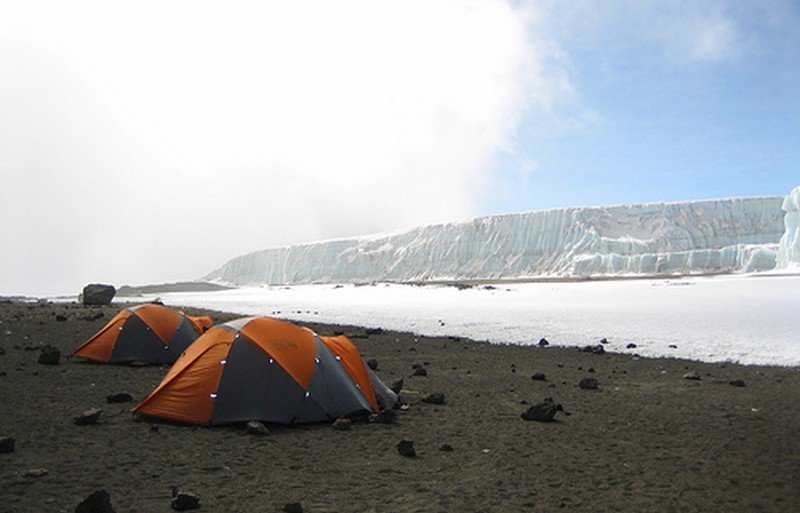 How dangerous is the Western Breach Route?

There have been several accidents on this route, but only one—the most tragic—received widespread attention:

On the fourth of January in 2006 a group of American climbers was making their way from the Arrow Glacier Camp to the Western Breach. They were not far from the camp when the foot of the glacier 150 m above them released some 39 tonnes of rock.

It was a very windy day and the climbers likely did not hear it coming until just before the rocks struck them.

Three climbers were killed, one other along with four porters were badly injured.

The investigation that followed confirmed the initial suspicions that the rock fall was due to the glacier melting and retreating. Rocks that were previously locked up in the ice are freed and fall. Sometimes isolated rocks fall, but in this case a whole deposit broke loose.

There is no way to avoid this "death zone". There was, however, a way to minimize the exposure by changing the route

The route that the American climbers—and everyone else who climbed via the Western Breach before the tragedy—followed, spent nearly an hour in this high risk area. The new path reduced that time to about five minutes.

It's a vast improvement but it doesn't eliminate all risk. (In fact, according to the investigation team one variation would even add a new risk from rock falls in another area.)

The Western Breach is not the only Kilimanjaro route that has experienced rock falls in the past. Small falls have occured on both other ascent routes as well.

However, the objective risk associated with the Western Breach Route is considerably higher than on the two other routes.

There is another risk factor associated with this route that hasn't been mentioned yet: at a height of 5500 to 5600 m you come to a point (the "Rock Steps") that is considered a "point of no return".

If an evacuation becomes necessary above 5600 m, the only way is UP!
A descent on the Western Breach Route would be too difficult and take too long.

Even if someone suffers from life threatening altitude sickness symptoms, they would have to continue the ascent for the remaining 150 or so metres to the rim and then follow the rim for nearly one and a half kilometres before being able to descend to Barafu.

Still determined to climb Kili on the Western Breach Route?
Learn more about the accident investigation [PDF] and minimise the risk by making informed decisions: www.westernbreach.co.uk/recommendation.html

You can reach the Western Breach Route via the Machame, Shira, Lemosho or Umbwe routes. On the third or fourth day of the climb those routes pass the Lava Tower to continue the Barranco Valley.

Climbers planning an assault on the Western Breach spend this night at the Lava Tower Camp (4642 m/15230 ft).

The next day is a very short one, involving only about an hour of walking to reach the Arrow Glacier Camp (4871 m/15981 ft). The slow pace is necessary to give the body time to acclimatise.

The Western Breach Route is shorter than the other two Kibo ascent routes (via Stella Point or Gillman's Point). Therefore your summit night starts later than on the other routes, at about 2 am the earliest, hopefully not after 5.30 am. (Later than that you would be exposed to a much greater risk from rock fall).

There is only one way to make a route on a mountain shorter: the Western Breach route is much steeper than the other routes. (Hard to imagine since the other two seem more than steep enough already.)

The Western Breach Route is difficult but not as technical as it's often portrayed. There are some tricky sections but the majority of the difficult parts require scrambling, not specialist rock climbing skills. How technical it becomes depends on the weather. If there has been snow you may require an ice axe, something you won't need on any other routes.

Mountain climbing experience is required, or at least very, very strongly recommended to attempt this route, but you certainly do not have to be a rock climber to tackle the Western Breach.

There is no single, well beaten path through the Western Breach as there is on the other routes. The surrounds change all the time, snow and ice shift, rocks fall... Hopefully your guide knows his way!

It takes about fours hours to reach the edge of the crater and the Crater Camp is only 10 minutes from there.

The path from the crater to the summit is again awfully steep. Unlike the path through the breach this path is well defined. You can see the usual zigzags in the crater wall. It will take you about another hour to battle your way along the switchbacks to Uhuru Peak.

One last recommendation to keep you alive: whether you reach the crater camp of Kilimanjaro via the Western Breach Route or on another route, you should climb to the summit BEFORE you spend a night in the crater. 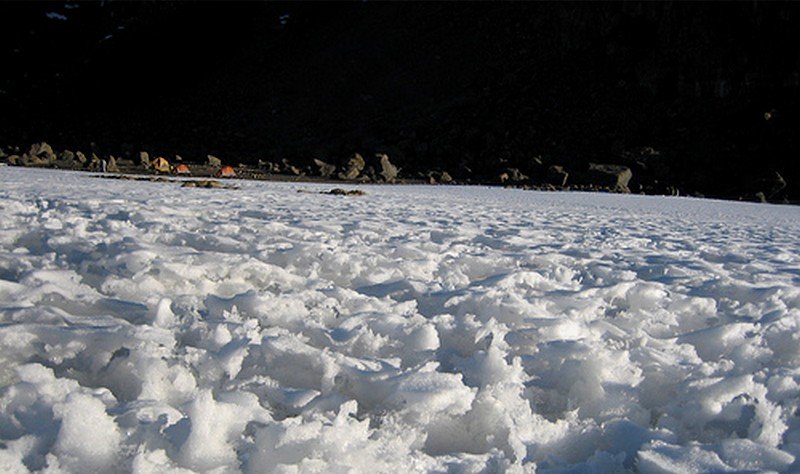 The Kilimanjaro crater camp at night, photo by Telethon via Flickr.

The rule "climb high, sleep low" applies to all trekking at altitude. It exists for a reason. It forces your body to adapt in a way that hopefully makes it safe for you to spend extended time at this very extreme altitude.

More about all Kilimanjaro routes.